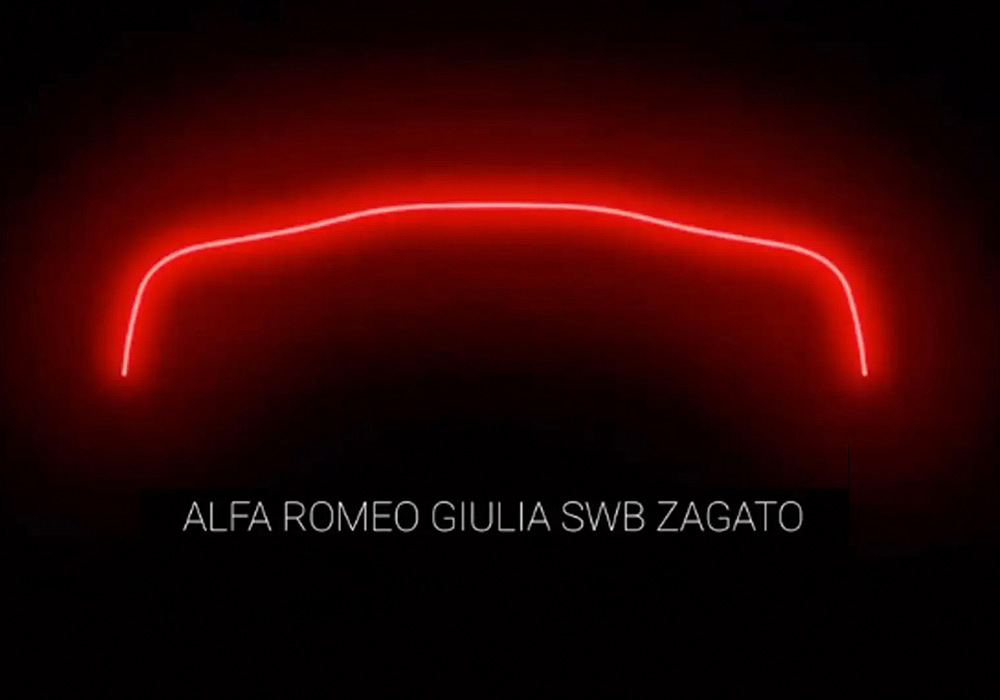 The tantalising prospect of a latter-day Alfa Romeo TZ, the distinctive little coupe dubbed the “baby Ferrari GTO” cooked up by Alfa and Zagato as a GT racer in the early 1960s, looks set to become a reality. Sixty years on the two Italian companies are at it again, teasing a new coachbuilt coupe. And with the superb current Giulia as the basis, it could be really something special.

Both Alfa Romeo and Zagato have confirmed via social media that the project exists and goes by the name Giulia SWB Zagato. They are not sharing anything more about it at the moment, aside from teasing us with a video clip of a wavy thin red line. It’s clearly an LED light bar – but equally clearly mimics the outline of the TZ’s sharply cut off, Kammback rear end, one of the car’s most distinctive features.

Repackaging modern components into a form that draws inspiration from the TZ comes with the potential to be a real driver’s delight, as well of course as being a typically individual-looking car in the Zagato tradition.

The original TZ was a force to be reckoned with. Small, aerodynamic and very light weight (just 660kg), the “baby GTO” was developed as a bespoke racer by Alfa’s competition arm AutoDelta in league with Zagato. Powered by a 1600cc twin-cam four-cylinder engine with 160PS (119kW), the TZ won on its race debut in 1962 and from then on proved virtually unbeatable, winning its class at Sebring, the Targa Florio, Nürburgring, the Tour de Corse and Monza.

The secret of its light weight was its aluminium-alloy bodywork created by Carrozzeria Zagato, which clothed a multi-tubular spaceframe, a construction technique that provided the initials for the new car’s name: Tubolare Zagato.

The TZ took its mechanical components from the then-current Alfa Romeo saloon, the Giulia TI, and we can assume that will be the case with the new Giulia SWB Zagato. We can’t imagine it will revert to a tubular spaceframe though; far more likely is a version of the Giulia monocoque but with a shortened wheelbase, cutting weight and enhancing agility.

From all this it is easy to imagine a coupe that’s shorter, lower, more aerodynamic, much lighter, track proven and powered by…what? If we are going to speculate we’ll put in a bid now for the superb 2.9-litre twin-turbo V6 from the current Giulia Quadrifoglio, and which in GTA form boasts as much as 540PS (403kW).

Today’s Giulia is already one of our favourite cars. So how good could the Giulia SWB Zagato be? One thing’s for sure; it’s bound to look distinctive. Alfa and Zagato first worked together a hundred years ago and have jointly produced many memorable cars, though not for a while – the SZ of the 1990s being the last time the two joined forces to design a car.

The Giulia SWB Zagato is also bound to be on the pricey side, like the TZ these days: Gooding & Co auctioned one of those at its Hampton Court sale in London in September 2022 and got £1.1m for it. The new car’s very nature will also make it a very rare item, again like the original. Only 117 of those, plus a dozen of the restyled and more powerful TZ 2 models, were made before production ended in 1967.

Alfa Romeo has its own new sports cars coming, according to the latest masterplan for the storied Italian marque, but there’s surely always room for a few specials to further the rebuilding of sporting prowess – so we really hope this one comes off.