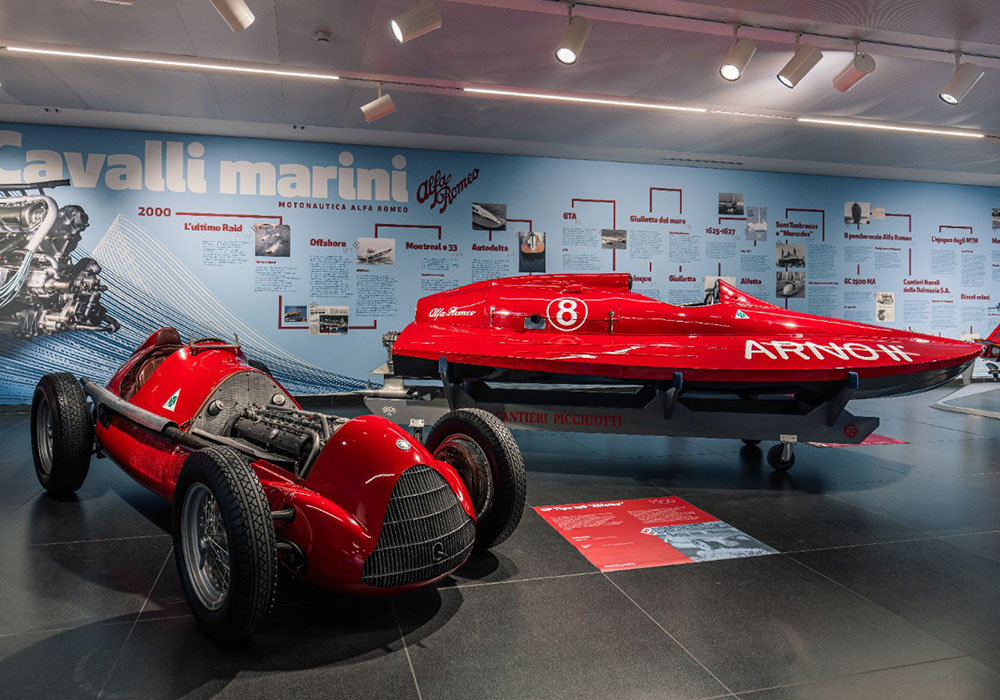 These boats define the water sports history of Alfa Romeo

The Alfa Romeo Museum in Arese is paying tribute to the less known chapter of Alfa Romeo in the water, with a new exhibition entitled “Cavalli Marini” (Sea Horses), a quotation from an article published in the journal Quadrifoglio in 1973 and is an opportunity to discover the ‘other life’ of the Biscione’s engines from competitions to public transport, and from military vehicles to the motor trawlers used after the Second World War to supply the corporate canteens.

Five world titles, the first two Formula 1 championships in history, 11 Mille Miglia, 10 Targa Florio, hundreds of other triumphs in the Sport and Tourism categories: Alfa Romeo’s sporting history on the road and on the track is well known, but its one in water less so. In fact, the technologies and innovations developed by Alfa Romeo were also used in motor boats from the 1920s to the 1980s. Aeronautical and automobile engines were adapted for marine use, both production and racing, derived not only from the legendary Alfetta during and after their automotive careers, but also from the Giulietta, Giulia GTA, Montreal, 2600 and others. Among all the records and world, European and Italian titles in the various classes, Alfa Romeo won on the water almost as much as on the track and on the road.

Records and more
A brand historically bound to the world of racing, Alfa Romeo has a rich list of achievements to show also in boating. Nine of the 10 vessels on display in this exhibition (the tenth is a pleasure boat) alone can boast as many as 11 world records, six world championships, seven European championships and nine Italian championships, and five Coni gold medals. The exhibition traces the history of all the types of engines that prevailed in boating: from the legendary Alfetta to the various versions of the twin shaft, up until the Montreal and the Tipo 33.

The “three lives” of the Alfetta
In the field of boating, the engines, which were adapted for marine use, were often yielded exclusively for temporary use and managed on the racing fields directly by the Alfa Romeo racing department. This was the case, for instance, of the Alfetta engines. For this exhibition the Arno II, a streamlined monohull built by Picchiotti shipyards in Viareggio in 1946, is reunited after 70 years with the engine that powered it at the time, originally conceived for the Alfetta 158. An engine which, when it brought Alfa Romeo its first Formula 1 victory in 1950, had already won three world championships on the water, conquered an Italian title, broken the world speed record and much more.

Achille Castoldi had obtained the exclusive use of the 158 engine in boating competitions in 1938 and in 1943 he was the one who saved some of the Alfettas by hiding them on his farm in Abbategrasso, sheltered from the bombings and war requisitions.

The Arno II racer was even captained by Achille Varzi, who was able to climb onto the podium of the Luino Cup in 1948. In late 1949, when the revolutionary ‘three points’ were introduced, the Arno II was put to rest without its engine and never used again. However, the engine did not retire. In its road version, it won the first two titles in Formula 1 history in 1950 with Nino Farina and then in 1951 with Juan Manuel Fangio.

When Alfa Romeo retired from F1, a new adventure was waiting for the Alfetta engine. Laura 1°, Moschettiere, Tamiri, Laura 3° – the latter was even powered by two Alfetta engines connected in line. It wrote memorable pages in sports history, with aces like Mario Verga, Ezio Selva and Castoldi himself, who accumulated racing victories as well as speed records.

Parade of World Champions
The exhibition also includes other vessels with an impressive track record: the Loustic 2, an LV-1300 class inboard-racer built by the Celli shipyard in Venice and powered by the 1,300cc engine of the Giulietta AR530. In 1964, it won three world titles in the five, 10 and 15 mile races in its class.

Then there is the Molinari-Alfa Romeo 2500, the only existing vehicle of its kind, which won the world title in 1966. Built for the Agusta Fortunato Libanori team, its bodywork is made in aeronautical aluminium alloy produced by the Agusta Helicopters department. As a tribute to the collaboration with this sector, the tail flaunts the colours of Alitalia’s airliners.

And then, the hull “Dalla Pietà – Alfa Romeo” which won three European and two Italian titles in the European Runabouts / Inboard sport category between 1968 and 1970. A unique example, it was built for Luigi Raineri, a famous tuner of Alfa Romeo marine racing engines.

The “Celli” from 1970 is the first of the four 2500 racers powered by the Montreal-Autodelta marine engine. It was steered by Antonio Pietrobelli, a famous driver and winner for more than 10 years of Italian, European and world titles in track races.

The series of racing boats is completed by a racer built by the Lucini shipyards in Como for Franco Cantando, winner of the R3 world record in 1974 and world champion the following year. Finally, there is the “Popoli-Alfa Romeo” from the Alfa Romeo Museum Collection. With this hull and Type 33 engine, which had been taken to 2.5-litres by Autodelta, Leopoldo Casanova set the world speed record in the KC 500 KG class, which remains unbeaten to date, at an average speed of 225,145 km/h.

From explosive punts to Venetian boats and pleasure boats
The history written by Alfa Romeo on water is not only made up of races and records, but includes much more. Bearing witness to the use of the Biscione’s engines in the field of tourism is the “Glauco”, an extremely rare traditional Vidoli di Stresa pleasure monohull from 1932, powered by an equally rare 6C 1750 engine. It was the typical tourism boat for the wealthy families of the time and comes from the collection of the Lariana Boat Museum.

The victories, the challenges, but also the history of Venice’s vaporetti powered by Alfa Romeo, or of the infamous “explosive punts” used during the Second World War are told in the exhibition by means of unique scale models, historical images and a rich collection of objects and documents.

Admin
https://www.alfaromeoworld.com
Previous Post The story of Alfa Romeo’s Quadrifoglio badge Next Post Alfa Romeo celebrates its 111th anniversary together with its fans