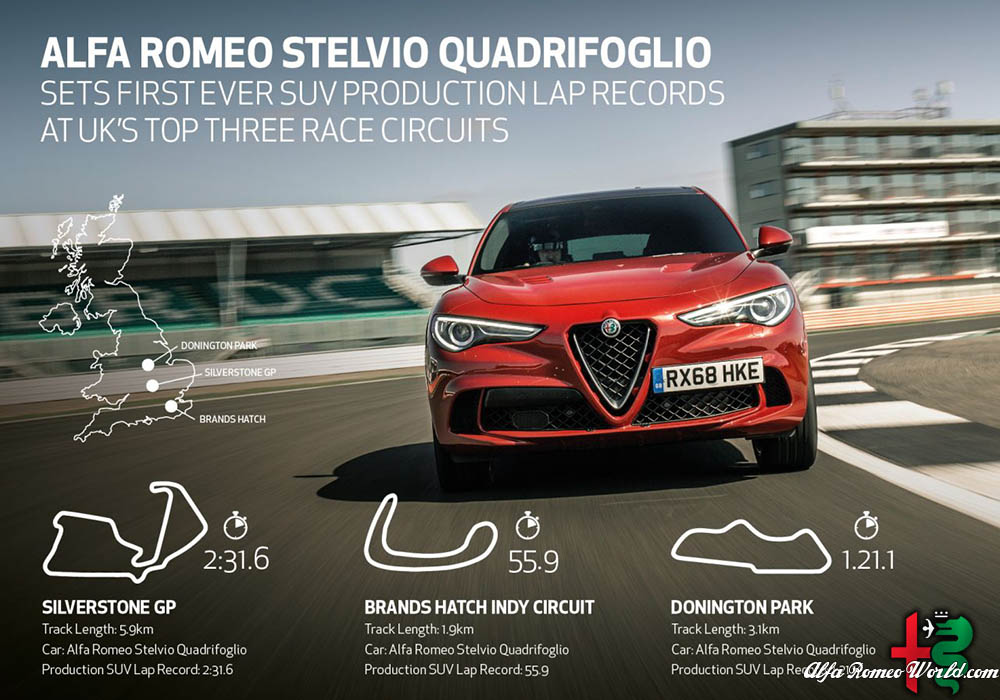 Alfa Romeo has thrown down the gauntlet by recording the first ever SUV production car lap records around three of the UK’s most iconic race tracks.

Professional racing driver David Brise secured a blistering 55.9s for the Brands Hatch Indy circuit, 1m21.1s at Donington Park and 2m31.6s at Silverstone. The unmodified, range-topping SUV was able to achieve these lightning quick times due to lightweight, state-of-the-art materials, such as its carbon fibre driveshaft, 50/50 weight distribution and an all-aluminium, direct-injection 2.9-litre 24-valve twin turbo intercooled V6 engine, which was able to deliver 510hp and 600Nm of torque to the asphalt of the three famous British circuits.

Brise said: “Doing anything that is a first on track is exciting, but the Stelvio Quadrifoglio made it an even more enjoyable experience for me. The performance from this family SUV is astonishing, its handling characteristics were really confidence inspiring and totally at home on track. It gave me all the things I needed to extract the best possible lap times and establish the three records.”

“Setting the very first SUV production car lap records at three of the top circuits in Britain is where our passion for motorsport and road vehicles crosses over but, once again, Alfa Romeo is at the forefront and the first manufacturer to set new benchmarks.”

Admin
https://www.alfaromeoworld.com
Previous Post This is the oldest Alfa Romeo in the world Next Post FCA submits proposal for a transformative merger with Groupe Renault to create preeminent global automotive group