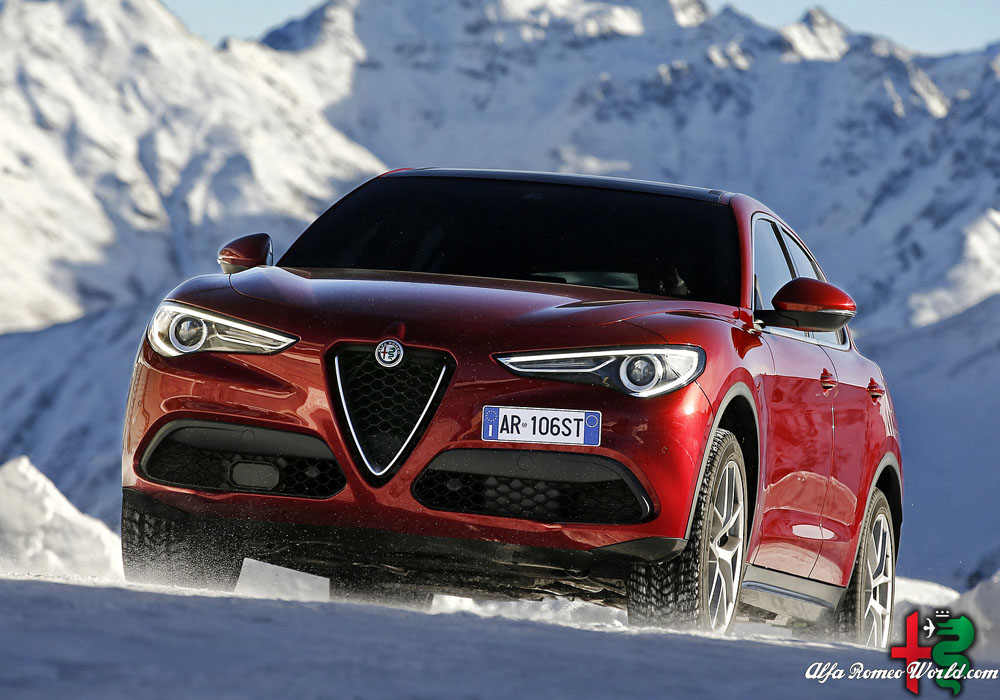 There was a great deal of hype surrounding the launch of Alfa Romeo’s new Giulia saloon. But the success of its latest model, the Stelvio SUV, is far more crucial for the Italian marque. After all, it’s expected to account for nearly two-thirds of Alfa sales in the UK next year, and figures are similar elsewhere in the world.

To succeed, this can’t be another Alfa that tugs at the heartstrings without delivering on a rational basis. And with the premium SUV market more crowded than ever, Alfa’s first foray into the sector can’t just be acceptable – it has to offer enough to stand out on more than looks alone. We’ve got behind the wheel of a UK-spec car in Northern Ireland to see there’s substance behind the svelteness.

The Stelvio still has plenty to shout about in the design department. From most angles we reckon it’s one of the prettiest SUVs around, and is easily more head turning than anything the Germans are currently churning out. Our only reservation is the rear three-quarter view, which makes the back end look a touch too bulky.

The interior is similarly elegant, yet again falls short of being faultless. It’s smart to look at, with a Maserati feel to the design, and trademark Alfa cues such as the deep cowled dials. The seating position is 190mm higher than in the Giulia to allow a better view out, and the dash isn’t angled as much towards the driver. But the actual driving position remains spot on and the seats are nicely supportive.

The dash layout is intuitive, too, with most of the switchgear operating with precision. It’s just a shame that the infotainment isn’t up to the standard set by the class best, with the 8.8-inch central screen lacking functionality compared to the more advanced systems in premium SUV rivals. The graphics aren’t as sharp, either.

Quality in the Stelvio is largely up to scratch, with a pleasing array of metal finishes and soft-touch materials – although nothing feels or looks especially upmarket or classy. It doesn’t feel as well-built as an Audi Q5, for sure, but the quirky design is precisely why buyers bored of the German class dominance may warm to the Alfa.

Alfa recognises that practicality is just as important as style for buyers in this class. So storage is good, with large door bins, two central cupholders and a cubby with a rather cheap-feeling lid in the centre console. However, outright space isn’t all that remarkable. Two six-foot adults will fit in the rear, but they won’t have a huge amount of head or leg space, while the 525-litre boot is merely average for the class.

In previous years, Alfa’s sporty marketing premise and lack of development funds meant its cars wrote cheques that the chassis and powertrains couldn’t cash. But the £1bn investment in the brand’s new Giorgio platform made the Giulia one of the best-handling small saloons – and the platform-sharing Stelvio is no different.

Use of aluminium in much of the Stelvio’s body and suspension helps even the heaviest models weigh in at a relatively svelte 1,660kg – making the Alfa the lightest car in its class. You feel that immediately on turn in, with a sense of agility and a lack of body movement that’ll impress even the most devout SUV-hater. It feels like a slightly higher, slightly flabbier Giulia, and that’s about as good as praise gets.

The steering is light but accurate and quick in normal mode, with a glut of artificial weighting when you shift Alfa’s DNA drive switch to Dynamic. Throttle response is also sharpened up, but nothing can be done about the drive-by-wire brakes, which react a bit abruptly to slight pedal pressure and take some getting used to. Our car was fitted with the Q4 all-wheel drive system, which can send up to 50 per cent of torque to the front wheels – yet engineers say it’ll never need to on dry surfaces. While we didn’t get the chance to test it in the wet or off-road, the Stelvio’s modest ground clearance means it’s unlikely to follow a Land Rover Discovery Sport very far into the woods.

We’d also like to try a Stelvio without this model’s 20-inch alloy wheels, as the generally calm and composed ride becomes fidgety and unsettled on rougher tarmac. Still, refinement is respectable, with only a touch more wind noise than some other cars at this price point.

We’ve no complaints about the Stelvio’s diesel engine, though. The 2.2-litre unit offers up a strong turn of pace – helped by the low kerbweight and super slick ZF eight-speed automatic gearbox. It’s subdued below 3,000rpm and respectably efficient given the all-wheel drive fitment, too. It’s expected to account for over 80 per cent of Stelvio sales in the UK, and given its balance of abilities we can see why.