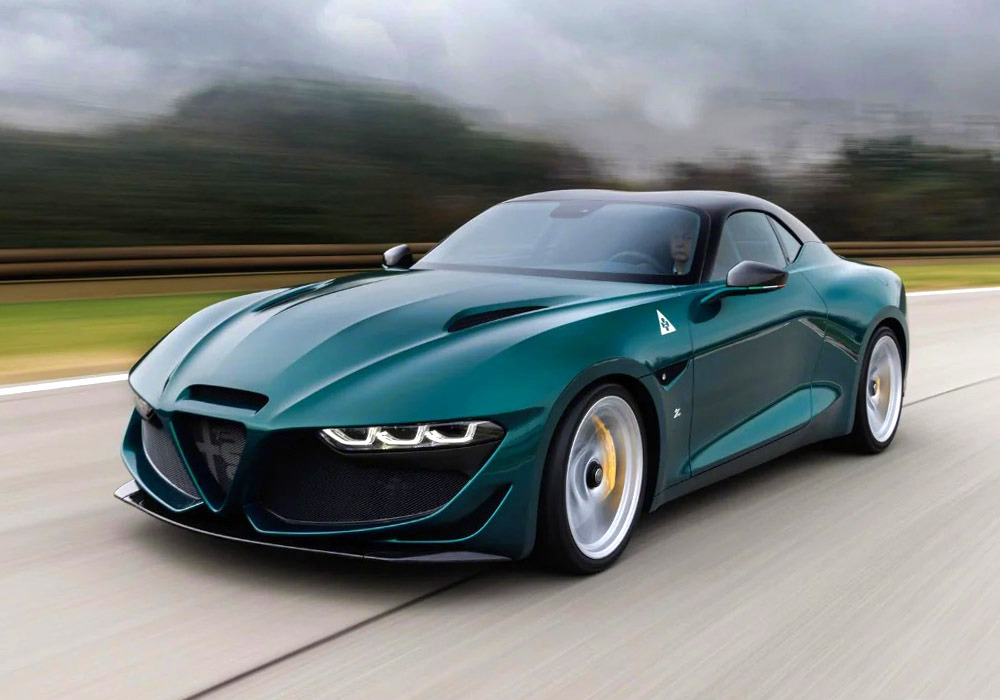 To mark the centenary celebrations of the collaboration between Alfa Romeo and Zagato, which began in 1921 with the Tipo G1, the Milanese coachbuilder chose to commemorate this important anniversary with the creation of a new model. The idea was to celebrate the current Alfa Romeo production of the Giulia and Stelvio, together with the legendary 6-cylinder engine in its latest GTAm evolution with a two-door Coupé Zagato coachwork in carbon fibre and shortened wheelbase: this is how the Giulia Swb Zagato was born. The project immediately met with the interest of a German customer, selected from among Zagato collectors with many Biscione cars in their garage including, in addition to a rare 8C Competizione, the very recent Giulia Quadrifoglio in its various special editions, including GTA and GTAm.

As far as design is concerned, if for the 100th anniversary of Alfa Romeo’s foundation (1910-2010), Zagato chose the ‘TZ’ theme, creating the TZ3 Corsa with 8C engine – winner at Villa D’Este – followed by the TZ3 Stradale based on the Chrysler Viper and immediately christened by the international press as the first American Alfa Romeo, for this new double anniversary the theme has instead been ‘SZ’. TZ and SZ boast two different design languages but both dress the Zagato concept of Granturismo. The design of the Giulia SWB (short wheelbase) Corsa prototype, therefore, is a natural evolution of the Alfa Romeo SZ models starting with the Codatronca version, born in 1961, and which dominated its GT Class in 1962 – 1963 up to the more recent S.Z. whose front end inspired the front treatment of the very recent Tonale.

Unlike the S.Z. of 1990, based on the Alfa Romeo 75 Evoluzione, which did not have a shortened wheelbase, this new prototype was named ‘SWB’ because it was developed in-house by Zagato from the Giorgio modular floorpan of the Giulia and Stelvio, optimising its overhangs and wheelbase, precisely in keeping with Zagato’s sporting tradition. The design process was carried out according to the Zagato idea of team-work, enlisting the support of Alejandro Mesonero (Head of Alfa Romeo design) and his team from the outset. The conception, development and production of the car were, on the other hand, carried out entirely and independently by the Milanese coachbuilder without external support. “The presence of the Alfa Romeo badge on the car is solely for descriptive and promotional purposes and Zagato’s choice to draw inspiration from the Alfa Romeo S.Z. Alfa Romeo ‘SZ’, an acronym that evokes emotions, roots its origins in the profound history of the coachbuilders, that of cars made with the sartorial care of those who dress a mechanical in a special way according to the thinking, the culture of those ateliers that, like Zagato, in this case, have interpreted the ‘biscione’ brand. The philosophy of this new SZ of 2023 is that of 1960, made up of a bodywork guided by simplicity, aerodynamics, physical lightness,” said Mesonero-Romanos.