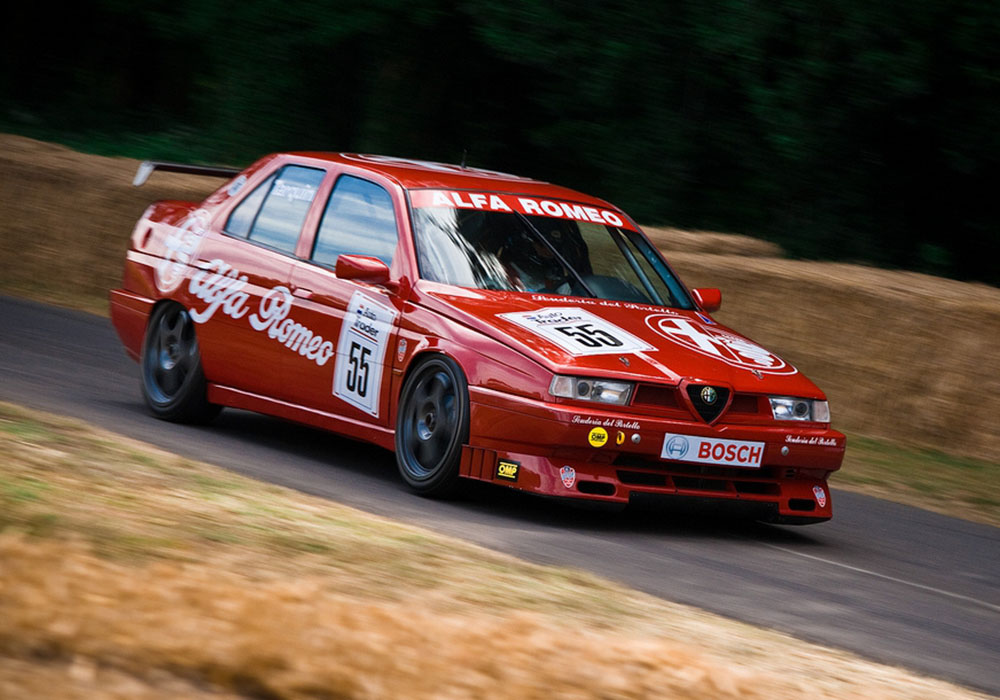 A classic piece of Murray Walker commentary (from an absurdly large album of greatest hits) and one of the many reasons why the 1990s Super Touring era of the BTCC will live long in memories.

Gabriele Tarquini’s dramatic accident happened at Knockhill just over halfway through the controversial 1994 season, which is the same season the Italian clinched the title in the exact car you see in the images above.

Let’s take it back to the start of that year. Alfa Romeo wanted to get in on the BTCC Super Touring action, so it asked its factory racing team Alfa Corse to homologate two 155 saloons for a debut in the 1994 season.

Only Alfa Corse went a little further than that, exploiting a loophole in the otherwise fairly strict (or especially strict with regards to aerodynamics) regulations that said 2,500 road cars of similar spec to the touring cars must be sold. Alfa launched a special edition 155 Silverstone road car with a much taller rear wing and an adjustable front splitter, thus allowing the race team to use the same items. The only problems were that Alfa Corse had kept this secret all throughout pre-season testing, and that Alfa Romeo sold the Silverstone edition road cars with the larger wing thrown in the boot, just in case the owner could ever be bothered to attach it.

The extra aero gave the 155 a huge advantage over its increasingly agitated competitors, who were running almost standard-looking Ford Mondeos, Vauxhall Cavaliers, Renault Lagunas and BMW 3 Series’ to name but a few. Tarquini took victory in all of the first five races. Uh oh.

Before the seventh race of the season (Tarquini only missed out on victory in no.6 after being punted off), a tribunal was held surrounding Alfa’s use of the 155TS BTCC. The rulemakers sided with Ford – and the rest of the grid – and told Alfa to run the car with its lower wing setting, before stripping the team of its championship points. Alfa Corse packed up its trucks and left Oulton Park, refusing to race.

After an appeal and some FIA guidance, a deal was struck that gave Alfa its points back and let it run the extended wings until 1 July that year. By this point other teams had also developed makeshift aero packages, though. Tarquini took two more victories before the deadline and only one in the subsequent nine races after it.

His consistent podium finishes, though, and that electric start to the year meant that Tarquini still managed to wrap up the driver’s title. As previously alluded to, chassis no.90080 (with the small wing, you’ll notice) was the car he was driving in the penultimate meet at Silverstone when the title was wrapped up.

What a ridiculously cool thing, and what a story behind it. And now you could own this very car – if you’ve got somewhere between €300,000 and €400,000 to spare, that is. That’s the estimate for when it heads across the block at the RM Sotheby’s Milan sale in June.

But hey, even if you’ve got no intention of bidding, this seems like a great excuse to get lost down a YouTube wormhole of Super Touring BTCC races. Off you pop…

Admin
https://www.alfaromeoworld.com
Previous Post Alfa Romeo celebrates its 111th anniversary together with its fans Next Post Alfa Romeo GTV could come back as BMW i4 rival with electric power