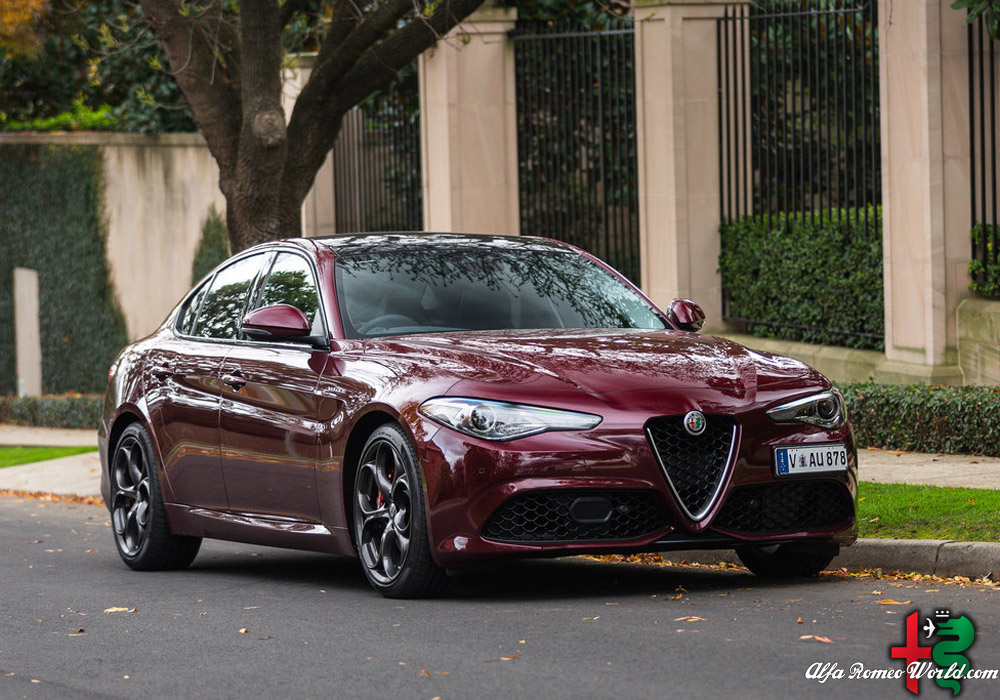 I distinctly remember the first time I got to drive the all-new rear-wheel-drive 2017 Alfa Romeo Giulia. It was a Montecarlo Blue QV, it was in ‘Race’ mode, and it was driven more than a fraction sideways around Victoria’s undulating Haunted Hills hillclimb circuit as part of CarAdvice’s mid-size European sports sedan comparison – where it was pitted against a BMW M3 Competition and Mercedes-AMG C63 S.

I also distinctly remember just how much it impressed. Hence, I was super-excited to get behind the wheel of the ‘lesser’ 2017 Alfa Romeo Giulia Veloce.

That means you could buy a Giulia QV, or a Giulia Veloce and $72,000 worth of literally anything else your heart desires.

So what are some of the differences?

Well, the QV scores a 375kW/600Nm twin-turbocharged 2.9-litre V6, while the Giulia Veloce makes do with 206kW of power and 400Nm of torque, compliments of a singularly-turbocharged 2.0-litre four-cylinder engine.

Both share the same eight-speed paddle-shifted automatic transmission (exclusively offered across the Giulia range), however, although the QV claims 0-100km/h in 3.9 seconds, a top speed of 307km/h, and a combined-cycle fuel consumption figure of 8.2 litres per 100km, the Veloce’s respective 5.7 seconds, 240km/h, and 6.1L/100km are still good numbers.

Standard kit on the Veloce ain’t bad either.

An integrated 8.8-inch central infotainment screen teamed with a transmission tunnel-mounted rotary controller is also on board, along with a 10-speaker premium sound system, satellite navigation, DAB+ digital radio, and Bluetooth phone connectivity and audio streaming. Oddly, neither Apple CarPlay nor Android Auto is supported.

And while the Giulia Veloce comes with front and rear parking sensors and a rear-view camera with ‘rear cross-path detection’, the rear-view camera only occupies about half of the available screen space.

Helping to justify its $7700 premium over the $64,195 mid-spec petrol-powered Giulia Super (the Super diesel starting from $65,895), the Veloce comes with not only Alfa’s ‘DNA’ driving mode selector – offering drivers a choice of ‘Dynamic’, ‘Natural’, and ‘Advanced Efficiency’ modes – but also other goodies.

In fact, the only options fitted to our tester were its Monza Red paint ($1300) and a dual-pane panoramic sunroof ($2200) – the latter disappointingly attached to a cheap-feeling manual rear sunblind.

True, it’s a little dark in there, and there’s not a lot of colour going on – no contrast stitching, for example – but overall, it all presents and works well. There are also decent door pockets, two cupholders, a small centre console bin, two USB inputs, a 12-volt outlet, and an auxiliary input.

Embossed with Alfa Romeo logos, the Veloce’s plain black seats mightn’t look all that exciting, but they are hugely comfortable and impressively supportive – holding occupants in, even when pace and cornering forces increase.

Hop into the 4643mm-long Giulia’s 60:40 split-fold rear seats, however, and it’s easy to find a potential weak-point of the Italian mid-sizer’s package: rear seat space is snug.

Firstly, some could find the Giulia’s rear door aperture a little tight – making back-row ingress and egress a touch more difficult – with rear doors that don’t open particularly wide not helping much either.

Secondly, while the rear seats themselves are firm yet supportive, squeezing three across the second row will be tight.

Legroom isn’t terrible, and headroom isn’t bad either, but it feels noticeably claustrophobic in the back (even flying solo). Plus, toe-room is limited and occupants must contend with one seriously invasive centre floor hump.

On the plus side, those in the back are still gifted grab handles, two coat hooks, air vents, a USB input, two small netted map pockets, and a fold-down centre armrest with two cupholders.

Again somewhat flawed, the Giulia’s boot appears quite small – even if Alfa claims it can swallow up to 480 litres of gear – with both a boot-mounted battery and bag crushing goose-neck hinges eating into space. There are also no luggage hooks and no full-size or space-saver spare wheel, although, there are at least four tie-down points.

Back into the driver’s seat, and the Veloce quickly returns to being in favour.

Following on from our experience of the full-fat QV, the Veloce’s everyday, around-town manners are largely positive.

With good noise, vibration, and harshness levels, the car shuts out a lot of the outside world, increasing the perception of being premium and well-built.

An excellent driving position also teams with clear controls to make becoming familiar with the Giulia a quick and easy process. This does not, however, extend to the infotainment system.

Not terrible, the rotary dial-driven system merely isn’t all that intuitive, and definitely requires more learning than those offered by rivals from the likes of BMW and Mercedes-Benz.

Despite running on Pirelli P Zero run-flat tyres (225/40s up front and 255/35s out back), the Giulia Veloce rides really, really well.

Planted, solid, and composed at freeway speeds, left in Natural mode, comfort and compliance are both high, even if the overall setup is still more on the slightly firmer side.

Off the freeway and into the twisty stuff, we shift modes from Natural to Dynamic.

Triggering a change in damping via a solenoid valve and the hydraulic flow inside the car’s shock absorbers themselves, the actively adjustable suspension firms up to the point where things feel even more sporty, without going too far or crossing over to being overly firm or busy.

If you want the sharper driving experience of Dynamic mode but prefer the softer suspension calibration of Natural mode, there’s a clever button located in the centre of the DNA selector, allowing the firmer dampers to be separately deactivated.

With a well-balanced chassis and excellent body control, the Veloce also boasts light and super-sharp steering, making the car feel as though it’s almost able to turn on its own axis.

A result of the Giulia’s double-track control arm suspension setup – “with semi-virtual steering axis” – and ultra-quick 11.8:1 steering rack ratio, the Veloce loves a winding road as much as it has the ability to devour one.

In fact, even though the accurate and highly responsive steering lacks a touch in the way of feedback, in terms of outright dynamism, the Veloce delivers about 70-80 per cent of the performance offered up by the significantly dearer QV.

Helped by good lateral grip from the Pirelli tyres and progressive, yet strong, retardation from the Giulia’s electromechanical brakes, the Veloce’s blend of comfort and ability mean it’s a car that not only inspires confidence, but inspires you to really push on too. The catch?

Flexible around town between 1500-2000rpm and able to get up to freeway speeds without the need to exceed 3000rpm, when roads clear and enthusiasm rises, the Veloce’s 2.0-litre turbo is more than a little aurally underwhelming.

Even when revving things out all the way to 6000rpm, there’s little engine noise and even less character – a bit like the QV in anything other than ‘Race’ mode, to be fair.

All of that said, the car’s not slow, and there’s still plenty of meaty mid-range torque from 2500rpm through to beyond 5000rpm.

Indeed, the Veloce’s ability to pack on speed is quite deceptive, mainly because of how quiet the thing is – no sweet engine note or exhaust pops or crackles here.

Although a nice enough gearbox overall, with adequately speedy shifts, mild moments of initial around-town hesitation – where you find yourself waiting for the transmission to wake up to inputs – aren’t uncommon, and automatic shifts in Dynamic mode can, at times, be overly aggressive and somewhat jerky and grabby.

In the end, while not quite as memorable as my first on-track experience with the QV, my week with the 2017 Alfa Romeo Giulia Veloce was an immensely positive one.

It’s not a big stretch to say that in a lot of ways, for most buyers anyway, the Veloce is probably the better buy over the QV. It might be half the price of a QV, but the Veloce is far from being half the car.

Sure, the Veloce might not be a match for the QV when it comes to flair or out-and-out gusto, but it looks mostly identical inside and out, feels almost as good being hustled along a twisty back road, and remains both dynamically fun and also commendably comfortable.

If you’re not planning on doing track work, and you don’t need to have a QV, the 2017 Alfa Romeo Giulia Veloce is a cracking car that would fulfil the brief for a lot of people, and make plenty very happy indeed.