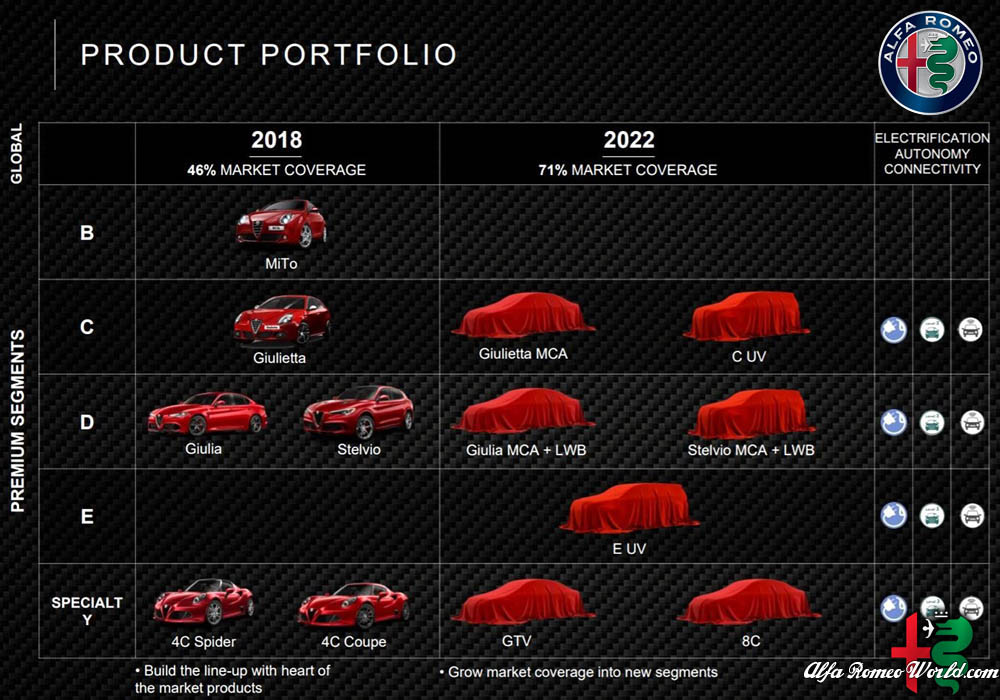 What we can expect from it in the next five years. Of course, they unfortunately went to print before FCA CEO Sergio Marchionne died, so certain elements are bound to change in light of new leadership. Nevertheless, there are plenty of interesting tidbits to chew on.

First, there are a few more details regarding the Alfa Romeo 8C super car, which was confirmed during FCA’s recent five-year plan announcement. Unlike the last front-engined, rear-drive 8C, the new one would be mid-engined with the rear wheels powered by a version of the Quadrofoglio turbo V6 brought up to the 600-horsepower range, and some amount of electrification added to the front axle. Indicates a total output of around 800 hp and 660 pound-feet of torque. A carbon fiber monococque would help keep the weight down, and to keep cost down, reporter Georg Kacher posits its production will be farmed out to a third party like Dallara. Both pricing and performance will be interesting with the 8C: how much does FCA want Alfa Romeo to compete with Ferrari? Without Marchionne leading both, perhaps it won’t matter.

Then again, how much it wants Alfa to compete with Maserati might, as the future Giulia-based GTV coupe could do just that. Apparently, the coupe and convertible range is intended to compete with the entire breadth of the German two-door catalogue, from 4 Series and M4, to C- and E-Class Coupes. Presumably it’ll therefore be more than just a Giulia coupe. Regular, high-performance and plug-in hybrid versions are mentioned.

Finally, as was part of the previously announced five-year plan, there will be SUVs introduced on either side of the Stelvio. Apparently, it was originally thought that the smaller of the two would be produced on the cheaper Renegade/500X platform, but that has been nixed in favor of the Giulia‘s “Giorgio” platform to maintain a higher degree of engineering sophistication. If so, good call. The bigger of the two new Alfa SUVs would also be on the platform, and since it’s been rumored that the next Jeep Grand Cherokee will be as well, it’ll be interesting to see how similar those two mid-size SUVs will potentially be.

[…] When Alfa Romeo presented its 2018-2022 product roadmap at the beginning of June, the revival of the 8C took center stage for obvious reasons. The Italians were kind enough to disclose some preliminary technical specifications, mentioning the performance coupe will be developed around a carbon fiber monocoque chassis with a mid-mounted twin-turbo engine and an electrified front axle. […]

[…] performed on Alfa Romeo’s first-ever SUV, the Stelvio, include the introduction of Michelin CrossClimate Winter tires as […]

[…] Alfa Romeo is planning to add two new SUVs to its expanding product line-up to bookend the popular Stelvio in the range, and both newcomers will be on sale in the next three years. […]

[…] departure of the 4C Coupe, while not all the unsurprising, is the first step of many in Alfa Romeo’s five-year plan. Last month the company laid the groundwork for seven new vehicles, including […]

[…] increased at Alfa Romeo, Dodge, Ram, and Jeep, while decreasing at Chrysler and […]

[…] Alfa Romeo will release a 7-seat crossover Castello. Alfa Romeo continues its aggressive expansion in the market, and is preparing another novelty – after the appearance of the Giulia sedan and crossover Stelvio needs to get a full-sized 7-seater SUV Castello, of which new details have become known, reports the Chronicle.info with reference to infocar.ua. […]

[…] Alfa Romeo reportedly has a second, larger SUV under consideration, and a new rendering from Motor1.com’s Italian team imagines how the bigger crossover might look. Allegedly, the model carries the moniker Castello, which is Italian for “castle.” According to our Italian colleagues, this name would work because there’s a famous alpine pass called Passo di Castello, which fits with the Stelvio that’s also named after a mountain road. In addition, there’s the Castello Sforzesco fortress in Alfa’s home city of Milan. The title fits well with FCA‘s Dodge Durango Citadel, too. […]

[…] though it’s a window into Alfa Romeo’s future, the Tonale has retro design cues paying tribute to the marque’s beautiful cars of yesteryear. […]