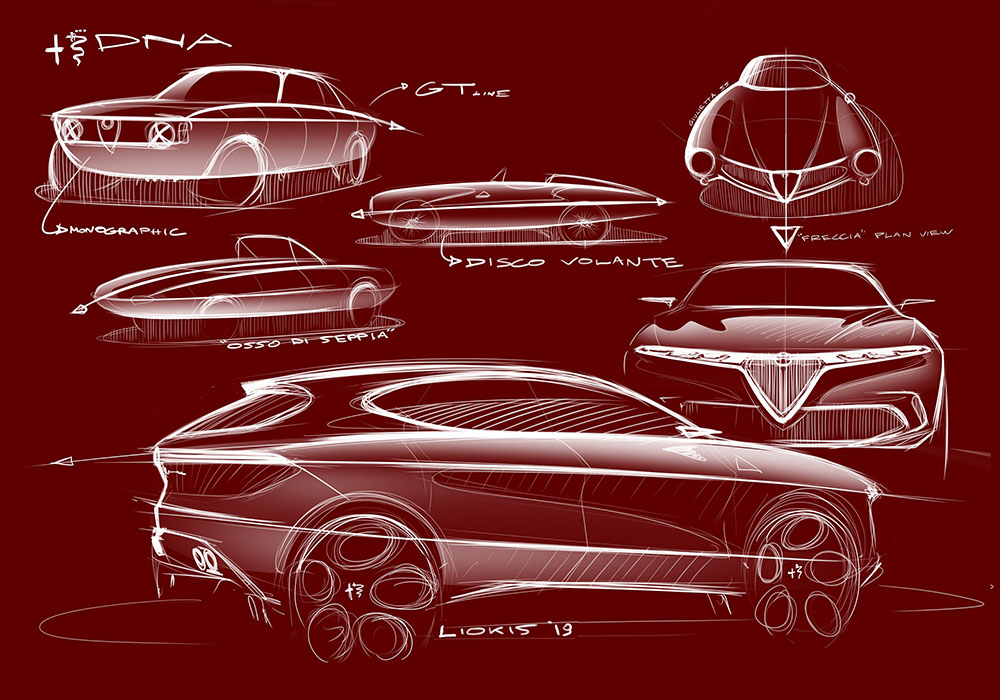 In 2018, Alfa Romeo celebrated its 110th anniversary with an e-book that mapped important waypoints along the road to the automaker’s past, from the company’s original name –Anonima Lombarda Fabbrica Automobili– that eventually shortened to Alfa, to the 2019 Giulia Quadrifoglio. This year, in a burst of red and zeal and muses timed to coincide with our celebration of another famous Italian, the third-century Roman St. Valentine, the Italian automaker released a second e-book, free to download, aptly titled Passione.

The subject this time is the art, inspiration, and influences of Alfa Romeo vehicles. Starting with the company’s nearly 90-year-old Centro Stile design center, the book is as much about art in general -especially Italian art- as it is about any car or crossover.

Grounding the reader in the context of Alfa Romeo design, the book humbly begins with Leonardo da Vinci’s Vitruvian Man. The first car doesn’t appear in Passione until page 26. Yet that 1952 Disco Volante -and every vehicle that follows- backs up every point Alfa Romeo Chief Exterior Designer Alessandro Maccolini made about line, shape, and volume on a call earlier this week.

Throughout Passione’s 100 pages, there’s plenty for Alfisti, art and design students, and regular old car lovers to soak up and learn. Roman arches and a Castiglioni lamp mingle with the doubled-up parabolics of “saddle mathematics” on the 156 sedan. We’re told that after Alfa introduced its 33 Stradale in 1967, Italian designer Bertone redressed the car’s chassis with his 1968 Carabo concept, taking less than a year to teleport an era-appropriate design into a gloriously menacing and ultra-efficient sports car of tomorrow. The 2021 Giulia Quadrifoglio front fascia shows its near mimicry of the 1963 Alfa 1300 Sprint, while in back, Alfa’s laid out a chart of Coda Tronca designs -cut-off tails- like an illustration of ape evolving into man.

And now that the coming Tonale subcompact crossover has debuted in compact form, Passione is free to pick up where 2018’s book left off, connecting Alfa’s past to its future. The Giulia GT of the 1960s provided its shoulder-defining GT Line to the Tonale concept. The three square headlights on the iconic 1989 SZ evolved into the triple-frame LED headlight signature on the subcompact people-hauler. And the glasshouse openings on the Tonale were cribbed from the 2007 8C Competizione.

Staying on message for Valentine’s Day weekend, there’s even a shoutout to ancient fertility goddesses and Gaetano Pesce’s “Up” chair, because Passione has something for everyone. It won’t make up for not having a date, but it makes great reading while you wait for your date to get ready for a socially distanced dinner.