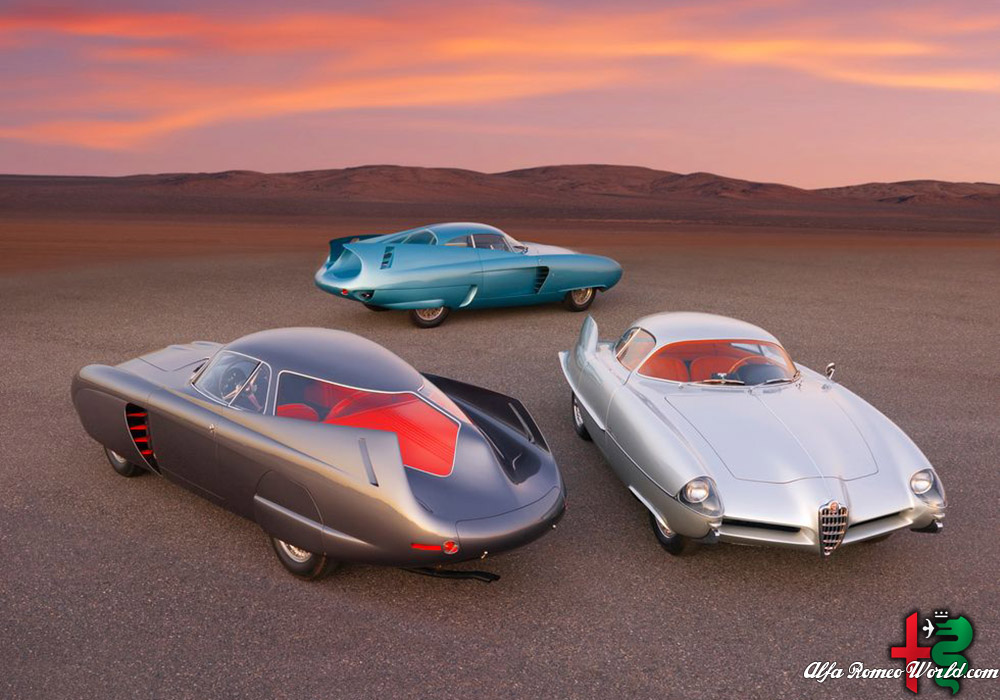 The three Alfa Romeo B.A.T. cars sold last night, as a set, for $14.8 million. It was on the low side of the estimate, but still, as they say on a different BaT site, “well bought.”

When we talk about epic triumvirates we must start with the originals: Julius Caesar, Pompey and Crassus in 60 BC. When it comes to cars you might think we’d be talking about the McLaren P1, Ferrari LaFerrari and Porsche 918 Spyder, but this treble is from a different era. It might even be the best trio of all time (barring Rush, of course).

The three Alfa Romeo Berlina Aerodinamica Tecnica cars (BAT 5, BAT 7 and BAT 9) were penned by Italian designer Franco Scaglione. Scaglione was a military man with an aeronautical engineering background. After the war he moved to Turin and tried to get a job with Battista Pinin Farina, who declined. He ended up settling on another legendary pen, Nuccio Bertone. Bertone was making one-off commissions for wealthy clients, but that business was suffering, until he found Scaglione. It was there that Scaglione first drew the Abarth 1500 Biposto that got Alfa Romeo’s attention.

Bertone chose the Alfa 1900 platform and Scaglione created these three masterpieces—which are not being sold with a bunch of other cars at an RM Sotheby’s auction, but with contemporary works of art.

The first was the Alfa Romeo BAT 5. It was called 5 because Scaglione worked through four full-size models before switching to actual metalwork for the fifth. It premiered at the Turin Auto Salon in May 1953 and was an instant hit.

The pontoon fenders and sleek hood betray the fact that Scaglione was an aeronautics engineer. The engine had to be low profile to fit so was modified with side-draft carburetors. The cockpit is teardrop shaped while the fins curve together towards a spine, stabilizing the airflow. Rear wheel skirts and exhaust vents for the front brakes complete the look. It has a coefficient of drag of roughly 0.23 at 94 mph, and reached a top speed of 123.6 mph with the modified-but-still-small four-cylinder. The lowest Cd of a current production car is just 0.22 (Mercedes-Benz A-Class).

After the first car’s success, Scaglione was encouraged to do another one, but emphasize the characteristics even more. He created B.A.T. 7, narrowing the front intakes, lowering the hood by more than 2 inches, lengthening the tailfins, and adding more pitch to some of the features. The coefficient of drag dropped to 0.19—Scaglione did this by eye, without the assist of computer-aided design or wind tunnels. It was scheduled to be unveiled at the 1954 Turin show, but was completed so late that Bertone and Scaglione personally drove the car to the event.

For the final BAT car, Alfa told Bertone and Scaglione to “make it more practical for road use.” The grille opening was greatly reduced taking on a production Giulietta grille, the fins were smaller to improve visibility, and a more pronounced beltline was added toward the rear. At the 1955 Turin Salon it was three hits in a row for the Italian designer.

Since the ‘50s the cars have been in private ownership, but they haven’t stayed still. Individual BAT cars were exhibited at car shows, “driven extensively on the road” and even raced in SCCA competition. In the 1980s, when Bertone was visiting California’s Art Center College of Design, concours organizers decided they wanted to display them together. At the 1989 Pebble Beach Concours they finally did, and Bertone even showed up to share stories.

Soon after, another private collector made offers to all three owners, who accepted, bringing them all under one roof. Since then they’ve been shown a few more times, at Geneva, the 8oth anniversary of Bertone, Retromobile and other places. In 2009 they were shown together at Concorso Italiano, a companion event to Pebble Beach.

Check back later tonight for the update. We’ll be very interested to see what these hammer for. And not to get your hopes up, but we’re going to try to get the new owner on the phone once the sale is done.