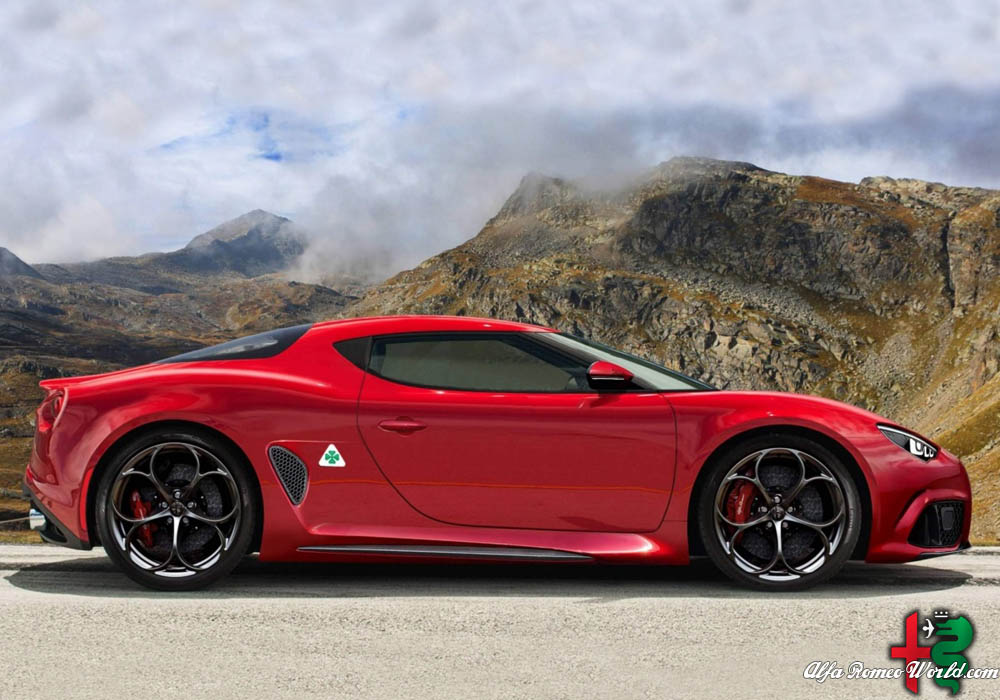 Alfa Romeo 8C Could Have As Much As 800 Horsepower

When Alfa Romeo presented its 2018-2022 product roadmap at the beginning of June, the revival of the 8C took center stage for obvious reasons. The Italians were kind enough to disclose some preliminary technical specifications, mentioning the performance coupe will be developed around a carbon fiber monocoque chassis with a mid-mounted twin-turbo engine and an electrified front axle.

A combined output of more than 700 horsepower was promised, but a new report indicates Alfa Romeo might’ve understated the car’s hybrid punch as now it’s believed the number will actually be closer to the 800-hp mark.
At the heart of the Alfa Romeo 8C will be a twin-turbo 2.9-liter engine borrowed from the Quadrifoglio-spec Giulia sedan and Stelvio SUV. However, for the new application, the V6 will be massaged to develop more power. How much more? Well, while the two Q models have 505 hp, rumor has it the upgraded engine co-developed with Ferrari will unlock close to 600 hp.

The combustion engine won’t be alone as it will be accompanied by an electric motor to form a powerful hybrid setup we’ll also see in the production-ready Maserati Alfieri. It will be good for approximately 150 kilowatts (201 hp), which corroborated with the V6’s muscle, will give the 8C a massive output of about 800 hp.

Alfa Romeo has already announced the reborn 8C will need less than three seconds to hit 62 mph (100 kph) from a standstill, so the car will certainly live up to its badge as far as performance is concerned. With the ICE driving the rear wheels and the electric motor powering the front axle, it means the car will adopt an all-wheel-drive layout.

The bad news? With the risk of stating the obvious, the 8C will be on the expensive side. The top-tier level of performance it will deliver will surely be reflected in the car’s asking price, and so will the limited availability. Apparently, production will be capped at a maximum of 1,000 examples.

A more attainable sports car from Alfa Romeo will be the new GTV, essentially an upgraded Giulia Quadrifoglio in coupe form.