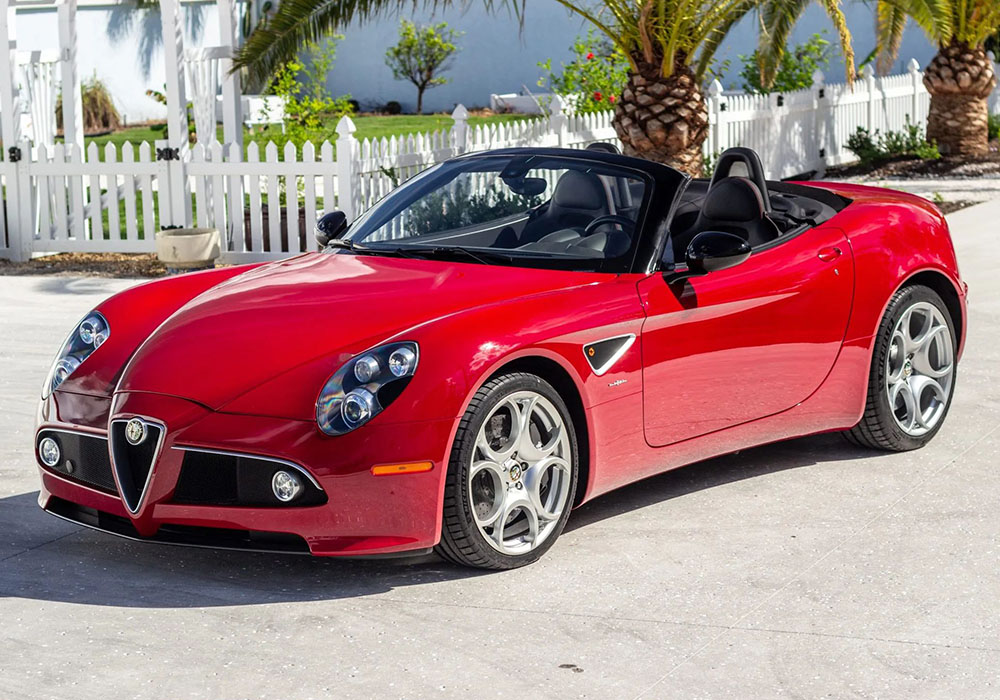 For the 2003 edition of the Frankfurt Motor Show, the peeps at Alfa Romeo took the veils off a front-engined and rear-driven coupe with gorgeous exterior styling. Dubbed 8C Competizione, with 8 standing for the number of cylinders and Competizione referencing the 6C 2500 Competizione that finished the 1950 Targa Florio in 1st place, the fixed-head design study was joined by a convertible at the 2005 Pebble Beach Concours d’Elegance.

Both the first and second concepts received plenty of positive feedback from the media and well-to-do customers, prompting the Italian automaker to work on a series-production model. The announcement came at the 2006 Paris Motor Show, where Alfa Romeo confirmed that 500 units would be made. In excess of 1,400 orders were received, which explains why the limited-run coupe would be subsequently joined by a canvas-top sibling.

Unfortunately for Alfa Romeo, which planned to produce 500 roadsters, only 329 would leave the Maserati plant in Modena. Alas, the bite-the-back-of-your-hand pretty 8C Competizione was discontinued after 829 units instead of 1,000 examples of the breed. The reason why Maserati handled production is rather simple if you remember that Fiat took over Maserati in 1993 and Alfa Romeo in 1986. These brands are still joined at the hip under the Stellantis umbrella, the Amsterdam-based automotive leviathan formed by Fiat Chrysler Automobiles and Groupe PSA (i.e., Peugeot and Citroen).

In addition to unutilized production capacity, la Casa del Tridente was better suited for production than Alfa Romeo due to Maserati’s close relationship to the Prancing Horse of Maranello, which supplied the naturally-aspirated V8 of the 8C Competizione. Also worthy of note, Alfa Romeo hadn’t established a dealership network in the United States of America back then. As a result, Maserati’s dealership network was tasked with selling, delivering, and servicing the 8C Competizione in this part of the world. Only 84 coupes and 35 spiders were originally delivered to the U.S. of A.

German automotive designer Wolfgang Josef Egger is the gentleman credited with the sexy lines of the 8C twins. He started his professional career in 1989 with Alfa Romeo, and merely four years later, he was appointed chief designer. Notable cars launched under his watch include the Walter de Silva designed 156 and 166, the 147, and the Nuvola concept that you can presently admire at the Alfa Romeo Historical Museum in Arese.

Supplied by Grugliasco-based ITCA Produzione to the Maserati plant in Modena, the steel chassis of the 8C Competizione and 8C Spider is a weird combination of Maserati Tipo M138 (Coupe and Spyder), Maserati Tipo M145 (GranTurismo and GranCabrio), plus a few bespoke touches here and there. The subframes are made from steel, yet carbon fiber is employed for the passenger safety cell. Gifted with double-wishbone suspension inspired by the Tipo M139-generation Maserati Quattroporte, the 8C rocks unique springs, dampers, and bushes. The suspension geometry isn’t shared either.

Tipping the scales at 1,585 kilograms (3,494 pounds) for the coupe and 1,675 kilograms (3,693 pounds) for the roadster, the 8C twins are indirect successors to the Zagato-bodied SZ and RZ that we’ve previously covered in great detail here on autoevolution. Gifted with a near-perfect weight distribution and a shorter wheelbase than both the Maserati Coupe and Maserati GranTurismo, the halo model stops on a dime thanks to 380- and 360-mm ventilated disc brakes from Italian brake manufacturer Brembo.

20- by 8.5- and 10.5-inch wheels are featured, mounted with Pirelli P Zero rubber boots. The only transmission available came in the form of a rear-mounted transaxle. A semi-automatic with two manual modes and three automatic modes, the six-speed unit is connected to the engine by a torque tube rather than a drive shaft. Be it manual or automatic mode, the transmission’s Sport setting opens bypass valves in the exhaust system.

A limited-slip differential also needs to be mentioned, along with Ferrari-sourced switchgear, manually-adjustable seats made from carbon fiber, and four colors for the body shell: the standard Alfa Red and Black, plus the optional Special Competition Red and Pearl Yellow. The Italian automaker sweetened the deal with paint-to-sample colors from both Maserati and Ferrari. Capable of 292 kilometers per hour (181 miles per hour) for the coupe and 290 kph (180 mph) for the spider, the 8C was famously described as “the best-looking car ever made” by Jeremy Clarkson on Top Gear.

JC and other reputable car journos didn’t like the gearbox, though. The tall guy that likes to shout “Power!” while oversteering also lambasted the 8C for its lackluster handling, unrefined ride, and unremarkable speed in comparison to contemporary Ferrari models equipped with the F136 engine.

The original batch of F136s came with a flat-plane crankshaft and dry-sump lubrication in Ferrari models, while Maserati and Alfa Romeo had to settle for a cross-plane crankshaft and a wet-sump oiling system. Maserati variants are part of the F136 Y series, and the Alfa Romeo engine is codenamed F136 YC. On full song, it produces 450 metric ponies (444 horsepower) at 7,000 rpm and 480 Nm (354 pound-feet) of torque at 4,750 rpm. As indicated by the tachometer, the 4.7-liter V8 can spin to 7,500 revolutions per minute.

Originally priced at $265k for the coupe and $299k for the roadster, the second-generation 8C hasn’t received a successor thus far. Alfa Romeo intended to revive this moniker for a twin-turbo V8 hybrid supercar of the midship variety. Teased with over 700 ponies on deck, it was ultimately canceled from the automaker’s future product plan in favor of an SUV.